Master Chen Zhonghua talked about the fire schedule (火候). We have to be ready to receive the information at the right time. If we miss the opportunity, we will never get it.

Against the bigger/stronger opponent, we must hold our ground, and look for the dot in the opponent. If that dot is moved, they will have no power anymore.

Against the smaller/weaker opponent, we will not fear, and we must obtain absolute dominance. Basically, on the touch, the opponent already knows that they have lost.

Peng is the energy that you are strong enough to withstand the opponent's power, and hold your ground.

The eight technique only exists from the start point of having the peng energy.

Peng is also the technique that push forwards and hold the opponent in front.

Lu is the technique that pulls the opponent backward.

Ji is the technique that pulls yourself forward toward the opponent to take up any space created.

Peng and Ji one after another create the worm action.

An is the technique that separates the opponent from you, and it can go up, down or forward.

Lie is the technique to split.

Zhou is not the elbow, it is a technique to create a warp.

Kao is the technique that slams a body part into the opponent.

"Only segmented moves are smooth, smooth moves are not smooth." As an exmaple, Master Chen teaches that we must make our arm dead, e.g. its structure does not change at all regardless what we do next. He may show us to rotate the waist backward to drive the arm forward. We must replicate this ourselves through repeated training. Later, we may discover that there are other ways to drive the arm, such as opening the armpit.  However, in my experience, there is no need to ask about the armpit during the particular teaching moment, we should simply focus on replicating what is shown at the time. Example questions could be:

In summary, we follow what is shown to us 100% and leave any thinking aside until we can replicate it.
Posted by Kelvin Ho at 2:49 PM No comments:

At the eye of a turnado

I was doing some stepping training last night. I stepped forward, and pretended to bounce myself off a wall to another direction, and repeated that with the other foot, and kept going. I ended up spinning around. The faster I did it, the faster the spin. Normally, I would feel dizzy, but I didn't. I was like inside the eye of a turnado, I saw things just going around me. When I wanted to slow down to stop, I still didn't feel dizzy, I let the energy keep spinning around, but I stopped moving the feet. Eventually, the spinning stopped. The feeling overall was quite weird.
Posted by Kelvin Ho at 8:56 AM No comments: 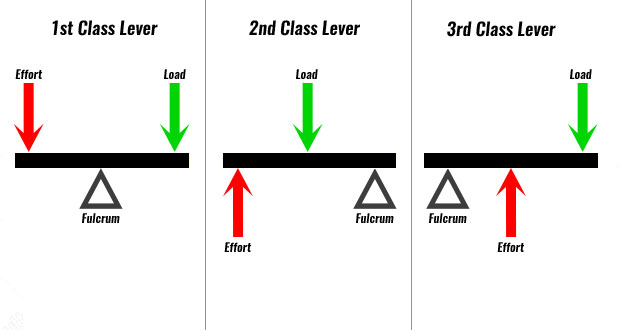 Master Chen Zhonghua talked about Practical Method's internal power coming from the ability to have a lever in any action. There are certain actions that are relatively easy to recognize the formation of a lever. For others, such as a punch, they are not so easily conceivable.  However, we must retentlessly look for a resolution.
A lever is a simple machine consisting of a beam or rigid rod pivoted at a fixed hinge, or fulcrum. A rotation can be viewed as a continuous lever.
As shown in the diagram above, there are 3 classes of lever as commonly defined. Taiji movements are made up of them, the following table only illustrates one example in the form for each class.

The fulcrum is placed between the load and the effort, while the effort and the load are in the same direction, e.g. A tidder todder, a balance scale, a pair of scissors.

In Second Closing, we use the right foot to cause the left arm to rotate around the left shoulder-kua axis to the left.

The load is placed between the fulcrum and the effort, while the effort and the load are in the opposite direction, e.g. A wheel barrel, a nut cracker, a paper trimmer.

In Brush the Knee in Oblique Stance, we press down the left shoulder to the left kua, this is much like the paper tripper action.

The effort is placed between the fulcrum and the load, while the effort and the load are in the opposite direction, e.g. A stapler, a hockey stick, a pair of tongs.

In Buddha's Warrior Attendant Pound Mortar, after the right hand goes to the right, we use the right elbow to lead and bring the arm to the centre.

NOTE: If we ignore the placement of the load and effort, the action of the lever itself can look exactly the same between class 2 and class 3.
We often can see only a partial system, we must figure out a way to see the other part.
If a missile is fired, it has the ability to travel 6000 miles, but it lands on a target that is only 1000 miles away. Its destuctive power is more at a closer distance, the equal opposite force that allows it to travel 6000 miles must be there somewhere.
Getting this idea will allow us to look at our actions differently.  See the diagrams at http://practicalmethod.com/2012/10/yin-yang-split-online-video-trailer/. It includes a lever that has an arm that is infinitely small, which essentially creates a split in a straight line. If we only look at one side of the split, it can be just like a straight punch.
Open our mind, and we may even recognize lever across dimensions, such as time. The stool with 3 cross legs have 3 levers in it. When sitting on it, the weight on top is converted from the top to the bottom, as well as from one side to the other. This is only achieved because of the non-moving dot in the middle. Think of a pin-pole camera, the smaller the hole, the sharper the inverted image. Similarly, the more precise the non-moving dot, the better the conversion. The three levers are depending on one another to provide the non-moving dot. Without the non-moving dot, there is no lever. This is yang rooted in yin, and yin rooted in yang. No one leg is more important than the other, it's all or nothing. The system must exist as a whole.
For the stool with straight legs, no conversion happens. The weight sitting on the top is directly supported by the ground. Three legs leaning on each other can stay up together, while 3 independent legs can't stand on their own.
Posted by Kelvin Ho at 7:26 AM No comments:

Master Chen demonstrated Lu, Cai, and Lie with in-with-elbow in “Shake the Pole”. These three belong to the same group.